When I heard the name Legend, all I thought was…with a name like that, he’s got some big shoes to fill. But worry not kids, he doesn’t just call himself that just cause it sounds cool. And the shoes fit him perfectly.

Shawn “Legend” Williams hailing from Springfield, Illinois, has made a great name for himself in the game by starting out correctly by having a powerful support system — his family. This kind of support, as most Artists know, is the foundation to what’s coming down the line. And listening to his tracks can almost make you feel that raw emotion, determination, and drive that’s been given to him.

Right from the top of the Music Player, “Self Centered” (the name is not deceiving, Shawn is an awesome dude!), possesses that ambience that today’s Hip Hop lacks…and needs. He’s not another Rapper just trying to spit 16 bars of how Swagger he thinks he is; he tells a story. And it’s no surprise, coming from a guy whose first CD ever purchased was Tupac’s “All Eyez On Me”.

As I pass through each track, that same Ambience coerces in each laid-back beat, allowing Legend the breathing room to tell his stories where it has most impact. In fact, if Tupac had “All Eyez On Me”, Legend through his own methods could confidently put “All Earz On Him” ;).

When it comes down to it, let’s face it, the mainstream Rap/Hip Hop stuff overall is really self destructing, and Shawn EASILY is another Artist that proves that most, if not all the best Hip Hop stuff is Underground. Not on BET, MTV, or Hot 97. Sooner or later, the Majors are going to realize this, and real Artists like Legend will have his time to shine. Legend easily lives up to his name, and to his motto: “I’mma live forever…or die trying”. 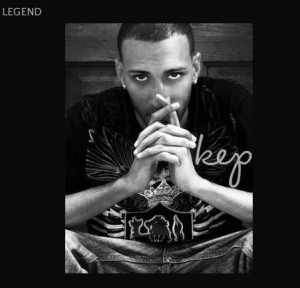