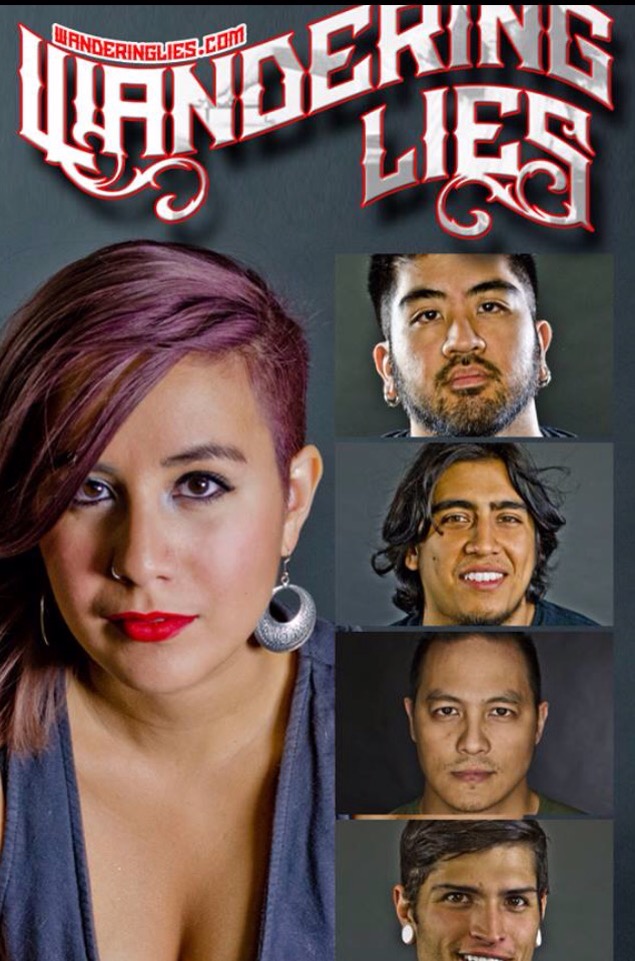 The glory days of female-fronted Grunge and today’s more appealing Alternative/Rock efforts has made an epic crossbreed under a group collective called Wandering Lies.

I must say, I really wasn’t expecting this. This was an in-your-face moment that made my espresso jealous. This band brings all the goods: exceptional songwriting structures, non-repetitive vocal rasps and lyrical outbursts, grungy and crunchy guitar riffs and Amp EQs, and a presence and sound that is the farthest thing from a letdown.

With their first track “Unreal”, we get something a little more calm before the storm. First thing is, this song starts out delicately to give you a demonstration of the beauty and maturity in the female singer’s soft-soothing side; which is appropriate and should never go unnoticed. Then in steps some grungy guitar swells, intense vocal melodies with some iconic rasp in her stronger vocal outbursts with an Alanis influence. The song captivates you immediately with its originality and perfect blend of the best of yesterday and today. I can easily see their roots being kept up with the times…a mixture that is very difficult to conjure up, but apparently this band has no problem whatsoever concocting this beautiful mixture. Both the female and male-shared verses are also a great additive to this chemistry; and you can easily hear both singers feeding off each other, and perhaps challenging each other at the same time. Which in time will make both voices evolve to sing together even more dynamically.

Next song is the intensified and guitar-driven “Watch You Bleed”, which is a vengeful edge-of-your-seat volume cranker compared to its predecessor. This is the track that really showed me how badass and open-spirited this band really is. There’s no electronic or synth weirdness whatsoever, and would be unnecessary anyways. I’ll stick to the epic vocal rasps and roaring guitars, thank you very much. This track definitely holds nothing back. It’s heavy, poppy, grungy, and sustains the perfect guitar progressions and vocal melodies that remind us of the undeniable songwriting talent from the 90s era from this genre. But the beauty is, like said before, you can hear today’s music sensibility as well. So this band dared to take one of the best eras of music, and reinvent its craft to fit today’s music interest.

Then comes my personal favorite, “Void”, which has “ridiculously gifted songwriting” written all over it. This by far has the best written vocal melody structures, and has that “hit song” status attached beautifully to it. Its energy is still on par with the previous track, and showcases the band’s writing capabilities in the proper ways. This song easily could stick in your head like glue, and could be heard easily in TV/Film or Soundtrack placement with its uplifting and gifted nature. It has a very fun-loving feel, gives you a dose of everything that is needed to showcase the band’s best elements, and makes you anticipate what’s coming down the road for them. If they stick to this signature sound, then they have no worries in the least. Because a band with a sound like Wandering Lies is a rare find, and a real gem of a discovery; and I can’t stress that enough.