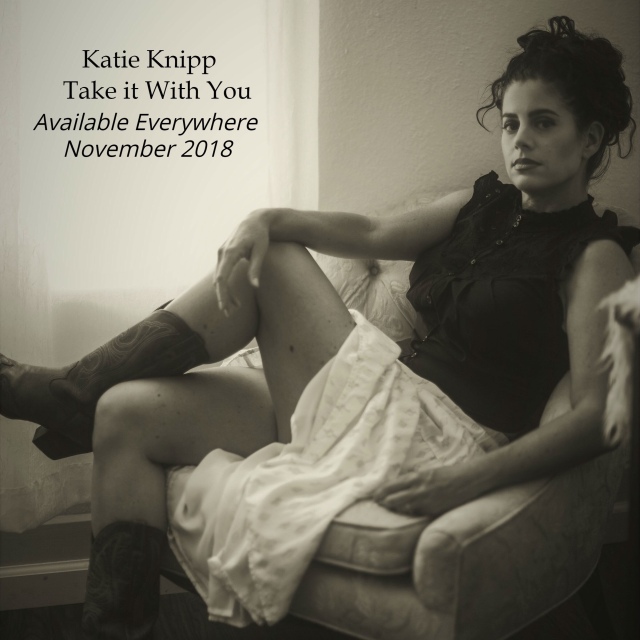 THE STORY BEHIND “TAKE IT WITH YOU”, RELEASING NOVEMBER 2018

The story behind “Take it With You”:

My name is Katie Knipp and I have been an indie artist for about 20 years.  Out of all my previous projects, this one means the most and has just floored me on so many levels.  It wasn’t too long ago that I wasn’t sure I would be able to perform and release more music, at least the way I wanted to.  I recently had two babies in a row , they’re now 2 and 3, and it was a pretty hard time in the beginning.  During my second pregnancy I got carpal tunnel from the swelling and I wasn’t sure if it would go away.  It was pretty scary because I play guitar and piano as well as teach piano for a living.  I was also silenced for about a year and a half due to the natural demands of my toddler that didn’t want attention taken away from him whenever I tried to practice.  Most days I could hardly sing or play a note.  The best I could do was type lyrics into my phone at 3 in the morning while up with the baby and read articles on how to get the most out of your one minute of practice time.  Since music is who I am, this was a very dark and depressing time for me and it was just last year.

Fast forward to this year.  In January I finally stopped breast feeding which allowed more flexibility in getting the chance to perform again.  My parents moved closer and were therefore able to help babysit while I practiced.  When I got back onstage as a solo act everything changed.  It changed because my attitude was different. My love for music had been tested and I couldn’t be more grateful now for ANY time I get to play.  I started writing songs from a more natural state of just pure love and they come easily to me now.  I’m no longer trying to prove myself because there’s only one me out there.  Nobody sounds like me.  With the luck and help of Scott at SBL (who also provided harmony vocals on a track), I was able to do a mini tour opening for Robert Cray, as well as opened for The James Hunter Six, and also my idol, Jon Cleary.  Ben Nieves, owner of The Recording Place and Piano Store, and his partner in crime, Chris Horton, came to one of my local shows in Sacramento.  It was there we quickly decided to team up and make the best record we could.  These songs were brought to life by the band I have always wanted to play with.  Neil Campisano on drums, Zack Proteau, on bass and tuba (he owns Octupus Audio and plays with Cover Me Badd), Brett Vaughnrechtfertig on guitar, he leads a killer band called The Mindful, and some extras on a tune with Chet Chwalik on trumpet and Al Bent on trombone.  When I first rehearsed with the rhythm section, it was such a weight off of my shoulders.  Finally, I found some guys that got it.  They brought the songs to life.  We were all listening to each other instead of playing over each other.   Now I am getting these mixes from Chris that bring the out the songs even more than I thought possible.  So, we make a great team.  After my ears, Ben adds his production touches as well and we’re a trifecta of success!  This record goes from psycho to mardi gras and all the feels in between.

So, I have a goal.  I want to be the first woman in my position to still get on the Billboard charts, get onto commercial radio, not just college and internet radio, sell a million units, get songs placed on TV shows and movies, without being gone 200 days a year on tour.  I still want to be able to raise my boys, perform whenever I can, because I LOVE performing, but also be present for my family.  I believe all of this can be accomplished if the product is good enough, and it is.  We’re so oversaturated with highlight reals of people on social media, fake music, fake art, and this is something real and refreshing to grasp onto.  Real musicians playing real instruments on songs written by a woman as real as it gets.  Mother.  Wife.  Piano teacher. Soon to be chart topper inspiring millions of other people around the globe.  You can join me in support of this goal by making sure to purchase this record either during the month of October Presale, or the first week it is released on November 7th.  When I can sell a bunch of units in this short amount of time, bells and whistles go off to the proper companies that can assist in ways that I can’t.  For 20 years, I’ve been wearing all the hats.  Now I’m asking for some help.  Thanks for reading.

Blues Americana artist Katie Knipp has been on a passionate musical journey her entire life. Always in choir, she was drawn to the piano at the age of 15. Since there was no piano at home, she began teaching herself on every lunch break during high school in the choir room. Beginning college, Katie believed it would be practical to major in medicine. Singing in a choir rendition of Mozart’s Requiem changed her future path. The haunting beauty of the music made tears roll down her face, and she knew that, in order to follow her heart, she would dedicate herself and her studies to music. Attending U.C. Santa Cruz, Katie enjoyed the calm, serene new environment. Driven to continually grow, she taught herself guitar on the beaches of California’s coast. “The waves would drown out any mistakes I made, so that I wouldn’t be embarrassed by wrong notes,” says Katie. As she dug deeper into her music major, it became clear to Katie that she also wanted to write her own material. Witness to a gruesome on-campus suicide on her 21st birthday, she decide she needed a change of scenery; she transferred to Cal State Hayward, where she would earn her Bachelor’s Degree in Music with an emphasis in vocal performance. The dark experience of the suicide, however, would stay with her, and became one of many events that helped mold her writing into the gutsy, soul-on-a-platter type material. To date, Katie has released four studio albums, a DVD, and played hundreds of venues throughout California. Sacramento News and Review nominated her for Best Blues Artist in Sacramento in 2017.  Readers of The Northbay Bohemian voted her band “Number One Band in Marin County” for two consecutive years. Currently laying down roots in Sacramento, Katie has worldwide radio support, has opened for such acts as Robert Cray, The James Hunter Six, Jon Cleary, The Doobie Brothers, Tim Reynolds and Tommy Castro, and shared the stage as a back up singer for Barry Manilow. Her music can be found on iTunes, many other digital mediums, as well as retail cds on http://www.katieknipp.com. Katie unflinchingly maintains the goal of being a viable force in the music world. Her success is largely based upon her willingness to take risks, diversify her format and learn from collaboration with others. Katie performs in several formats, from solo to full band. Equipped with a powerful voice, Katie also plays piano, guitar, dobro and harmonica. Her hard work has shaped her into a mature artist, focusing on the organic, free elements that reach people the most.  Currently in the studio with her 5th album to be released in the fall of 2018, she is also busy raising her two toddler boys as well as teaching piano and voice lessons in Rocklin, California.

Northern California Blues Americana Siren Katie Knipp is equipped with powerful vocals and plays a variety of instruments from boogie woogie piano to slide guitar, to honest harmonica laden stories in between.  Her raw solo act captures audiences hearts from her first notes.  Currently in the studio with her 5th album to be released November of 2018, her sound has been compared to Bonnie Raitt, Joss Stone, Beth Hart, and what the late Taz Digregorio of the Charlie Daniels band once said, “Dylan in a Dress!”