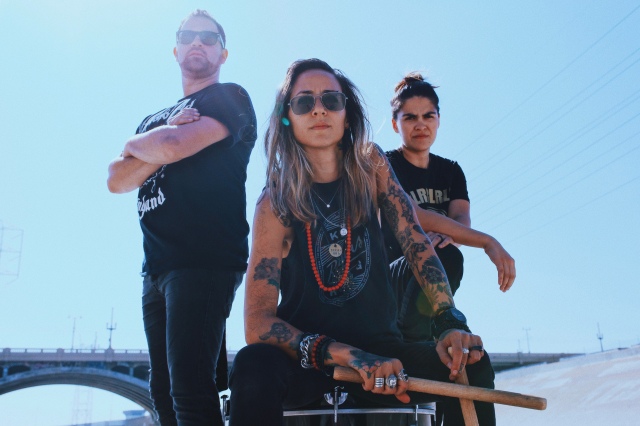 People have been describing Tarah Who? as “If Motörhead was fronted by Alanis Morissette”. The band recalls 1990s alt-rock and grunge’s tradition of balancing integrity with tuneful songcraft. And the energetic trio is very excited to showcase this sound with their upcoming EP “64 Women”, slated for release February 22nd, 2019.

Touching on a grungy rock sound that shares equal parts originality and familiarity, Tarah Who?’s female-fronted versatile style is heavy, melodic and encompasses anthemic song structures and songwriting. Lead by front-girl and band founder, Tarah G. Carpenter, she has teamed up with producer Jason Orme (Alanis Morissette guitarist) to compile a collection of tracks that showcase’s the band’s effective signature sound and boasts some of their best work to date. Comprised of 5 new authentic tunes with big, heavy, fast paced guitars and a driving, punchy rhythm section, “64 Women” puts a fresh hypnotic spin on yesterday’s and today’s iconic rock eras with a vast array of multifaceted elements that are contributed by each band member, and shines through as a whole collectively as a solid chemistry with each track that plays out. Tarah’s vocals are one of the central cornerstones to every song and projects an onslaught of energy and unwavering passion. With lyrical concepts that delve into story-telling methods that widely range from a series of topics, she never fails to grab your undivided attention with her ability to tell a compelling story and keep you on the edge of your seat. The band’s rhythm section, comprised of female-drummer/backup vocalist, Coralie Hervé, along with bassist/backup vocalist, Joey Southern, cruises through the tracks with loud, vicious tempos, dynamic fills, and rhythmic riffs that tie each song together and bring an unwavering presence of heavy energy to the band’s overall style on the EP. It’s a record that will feed the insatiable hunger of their current fan base, and amaze new listeners that discover them for the first time and leave them all hankering for more.

The loud and heavy power trio has been an industry buzz since their inception into the market and really hit the ground running throughout 2018; successfully touring the west coast last April and the east coast in July. Now with their heavily-anticipated new EP being geared up for release, the band has acquired a residency in January 2019 at the Redwood Bar in DTLA to promote the new record and will have an official release party in Los Angeles on February 23rd, 2019. In support of the record, they will be heading out in March 2019 to tour the Southwest. They will also be heading overseas to Europe in June and July 2019 to perform tour dates in France and the UK.

“64 Women” officially drops on February 22nd, 2019, and will be available on all digital music retailers and streaming platforms, as well as their live shows. Their first anchor single “Numb Killer” from the EP, will be releasing January 11th, 2019, and will be accompanied with an official music video. Mark your calendars!

Connect with Tarah Who?: