Recording Artist and YouTube Star Cody Tyler has graced our platform many times and has been a favorite among the Artist Reach camp as well as our readers. His versatile and catchy signature sound is a standout of its kind, he’s one of the coolest people you could ever meet, and the industry has embraced him for all the right reasons and continues to do so throughout 2020 and beyond. With his new single “Thursday” dropping July 17th (Spoiler: we reviewed it), we caught up with Cody in an exclusive interview setting.

•When did you begin your career in music?

Hmm very good question… I first was inspired after being baker-acted in the mental hospital back at the tail end of 2011 in Jacksonville, Florida. Prior to that, I had been studying at the american academy of dramatic arts here in LA and had been struggling with depression issues and that was how I ended up in there. But while there seemed to be a God-send because I never had experienced such a low in my life before and After having regular therapy sessions with the in house therapists I was asked what I liked to do to vent and just feel better and poetry had been my vice since 7th grade so I started to write and after the first poem I wrote i broke down and cried due to just how good it felt and from there everything became clear.. after the 6th or 7th poem I got melodies and knew music was my love and I knew I could reach others like me and just help people.

•I understand you went viral on YouTube. Can you tell us a little about that?
Well back at the end of 2013, I had written and recorded my very first serious song called “Mine” at a legit recording studio called velvet basement in Miami,Florida. A week or two later my friend from college Erix shot the video and we did it very gully style and just wanted it to be like a message .. once it was edited I put it up online and within like a weeks time it was in the hundreds of thousands of views and I was in shock… I honestly didn’t believe it lol.. I remember opening and closing my laptop chronically! Eventually it went viral passing 1 million views and from there I planned on moving here to LA to further my dreams and here I am.
•What inspired you to get into music?
What inspired me the most was just being in the mental hospital not knowing what to do or how to go about my life after that low point. And then to discover that I have abilities to truly convey all the deep emotions that at times am overwhelmed with.. smh it made me feel free and over time honing in on the craft its opened up so many aspects I’ve learned about myself. It’s truly DOPE...
•Where are you currently based out of?
I’m in Los Angeles California.
•I see you have new music coming out, can you tell us a little about that? What is it about?
For sure! Well I have been working on a completely new studio album.. so far I’ve gotten hit up by bigger name producers whom I cant name as of now but i’m very excited man and Ive gotten a chance to write for others as well.. I’ve got 2 singles coming one is called “That Guy” and it’s about just feeling good about yourself and not caring how it makes others feel because you deserve to love yourself and have confidence in yourself. It’s got a lot of edginess to it. Lastly, my engineer Austin Conner produced my other single called “Thursday” and it’s about breaking up with someone who’s not good for you and realizing life is to short to be moved by someone else and we should try to live our life as free and true to ourselves as possible. I actually used inspiration for the track from an old relationship with this girl from Miami named Alexandria Daimes. LOL. 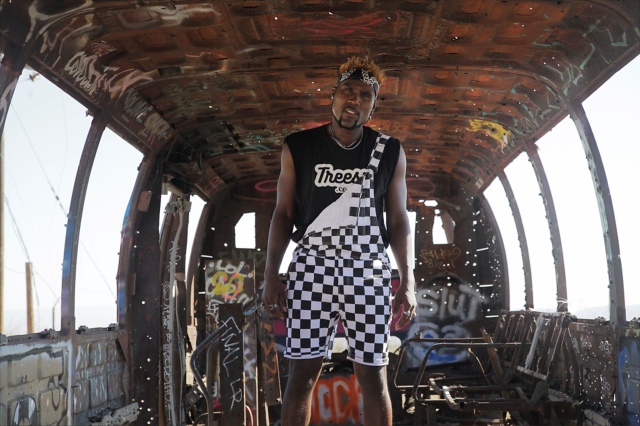 •Who are some of your biggest musical influences?
I’d say my biggest influence musically would have to be Kid Cudi. At least hed have to be ranked 1st. I say this because Cudi just makes such pure music and has never deviated since day 1. I remember the first time I heard Cudi’s music. It made me tear up and I was like wow there’s someone who speaks on ALL subjects and is in his own lane…it was so beautiful and I was so moved because I related so much. My other influence would be Kanye because just like Cudi he didn’t try to be anyone else but himself and graduation changed my life man… I remember hearing champion for the first time on the highway in my whip and again i broke down because I related to what he was saying and usually you don’t hear artists talk about subjects that aren’t trending you know? I like Chief Keef as well because his music is just organic and so raw… the production is always on point. I love all music though and listen or at least try to listen to everyone in  hip hop all the way to house music. Lastly 2pac is another major influence and even though i wasn’t cognizant during his major run.. my uncle would babysit and sneak and let me listen to his records  and  I caught on after and as i got older I listened and even though I didn’t live the life he did or know anything about it I still could feel everything he spoke and that to me shows the talent and reach of an artist.. and to this day his music and writing are impeccable.
•Lastly, where can we find your music?
You can find me on every single platform from Apple Music to IHeartRadio! I have two singles coming – one this month called “That Guy” and another by next month called “Thursday”.