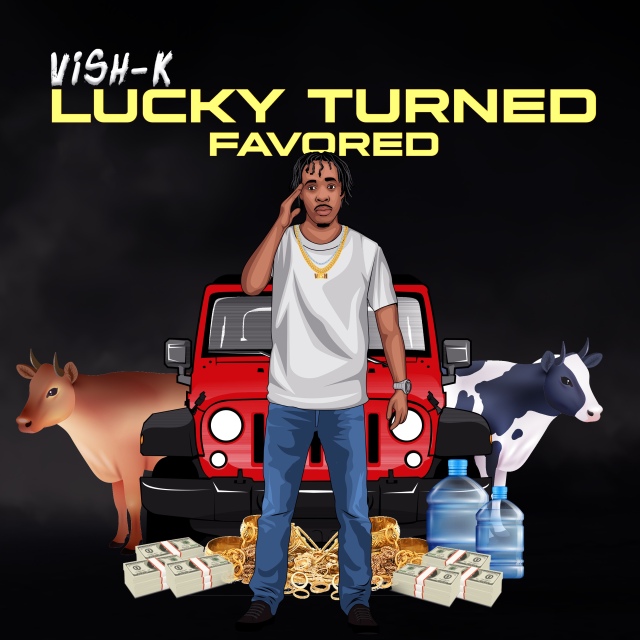 Emerging from the prominent Atlanta Hip Hop scene down the east coast, Rapper & Recording Artist Vish-K began hitting the ground running in the music realm 13 years ago when he came out the gate with a hypnotic and inventive Tra. And since that time has manifested into a versatile and multifaceted artist with his own signature sound and stylization with no signs of slowing down his momentum. Now, with over a decade under his belt, Vish-K has brought some of his most diligently crafted material to the forefront of his career with the release of his long awaited EP, ‘Lucky Turned Favored.”

This 5-track anthem is a perfect example of proving that the underground produces some of the best Hip Hop content that exists in the modern musical realm, even though it sits right under the nose of most mainstream labels. This rollercoaster ride of bangers from start to finish showcases Vish-K‘s super charged flow and sonic alchemy of dynamic lyrical structures when it comes to his rhyming techniques, and truly knows how to keep your attention fixated on him no matter what theme he puts forward. “Part of Me” and “Big Truckz” are masterful opening tracks that really emphasize V-K‘s vocal approach that has balance and composure, but still diligently touches on equal parts originality and familiarity; giving every listener a chance to hear nostalgic old school callbacks in each track, but still also offers up enough of his own innovative qualities to make each song modernized and fresh off the table.

The standout of this EP is definitely “Upper-Unity,” which was first put out as an exclusive single as a means to hype up this EP, and did exactly just that. It’s definitely the banger of the record that explores many sectors of Vish-K‘s vocal talent in many different angles. This bassy beat is accompanied by a vast array of cleverly executed bars and a flow that really carries the torch from start to finish as each verse carries out. It’s incredibly catchy, energetic and ties in the entire EP’s aura with its direction and artistic merit. But overall, every track is flavorful and serves up a Hip Hop style that keeps the magic coming from the underground scenes. Vish-K does not mess around on this EP and really raises the bar for any artist involved in the prominent Hip Hop genres with every bar and measure speaking for itself strongly, as well as effectively. ‘Lucky Turned Favored’ is currently available on Apple Music, Spotify, YouTube and several other digital music streaming platforms. Pick up a copy’s