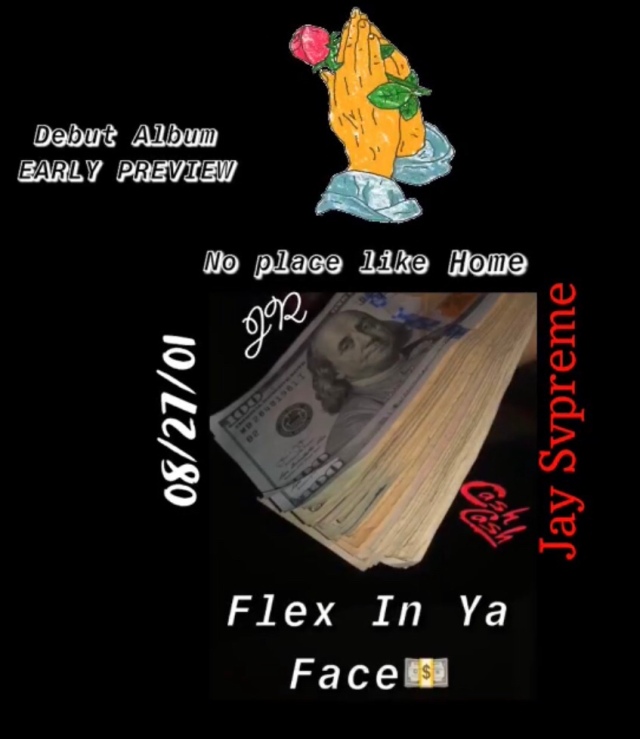 Cover Art of Jay Svpreme’s “Flex In Ya Face” Single

With some of the best lyrical outbursts possibly ever put to SoundCloud’s at-times convoluted platform, Jay Svpreme‘s flow comes out swinging from the very first measure with his new banger “Flex In Ya Face.”

This gem, though right out in the open, is quite the track to behold when realizing just how crucial it is. Jay‘s furiously approached flow is concise, precise and is executed in a way that is far beyond what is expected of the underground SoundCloud format, and really sets the bar higher for the indies altogether. This atmospherical banger beat’s genius comes from the fact that it’s completely open to any expectations of any kind before any lyrics any start – leaving us room with plenty of insatiable anticipation on Jay Svpreme‘s end of the spectrum. Then he comes out swinging from the very first bar and never lets up until it’s over, which at this point, is to be expected of someone with Jay‘s specific craft.

Once again, like his predecessors, Jay puts a multifaceted cleverness with versatility at the forefront that allows him to completely kill it lyrically from one measure to the next when it comes to conjuring a signature sound. This sound still remains amazingly authentic and wholesome just like his other material but truly showcases a perfect balance and composure that dynamically touches on equal parts originality and familiarity; giving each fan a visceral and nostalgic m is why Jay‘s powerfully projectional vocal approach and beat structures are few and far between when it comes to the true inspiration behind underground Hip Hop. And if he keeps his tracks up to these standards while also raising the bar at the same time, then he’ll be going places much higher if he keeps up this kind of momentum. “Flex In Ya Face” is also an early debut album preview, so be sure to pick up the track on your favorite digital music streaming platform today so you can give it a listen yourself. You won’t be disappointed.