As an established artist that has been writing music since the age of 9 and recording since the age of 14, Texas-based rising recording artist Lawless Ben (Born Benjamin Chiralaksanakul) has manifested into a versatile and multifaceted musician over the years with his own signature sound and stylization. After releasing nine mixtapes since 2005 along with two albums, an established career on the Datpiff platform, an EP and amassing an insatiably loyal fan base, the independent artist continues to raise the bar and hit the ground running with every release – and has no intention of slowing down anytime soon.

So we sat down with Lawless Ben for a comprehensive interview regarding his career, his past and present, as well as what the future holds in 2021 and beyond.

•How long have you been active under your current artist name?

•What music scene/city do you currently represent?

Reppin for my hometown Alice, TX and currently residing in San Antonio, TX.

•The pandemic has really thrown a wrench into the live music experience and for artists altogether. How has it affected you and your career?

Before the pandemic really came into full effect, I was actively doing shows. Since then, things slowed down of course with everything closing during the lockdowns so I decided to take advantage of the time and spent it recording, writing and composing music. I definitely made the most of the time and was nothing short of productive. Coursed out a new plan and am ready to get back on the road.

•What are some of your music influences?

•What kind of concepts do you tend to write about as an artist? Shine some light on that.

My musical content can vary. It’s hard to really narrow it down to one particular style or topic but majority of the songs of mine you will find are either a raw hip hop sound or a smooth rnb vibe. Most of which are inspired by true events, feelings, and real emotion. Capturing a unique sound for every session.

•When is your next release coming out?

I have a handful of singles set to release every other Friday starting March 19th. Me and my team are also currently working on new videos and are booking shows as we speak. Picking up right where we left off, with a vault full of unreleased records ready to be heard. 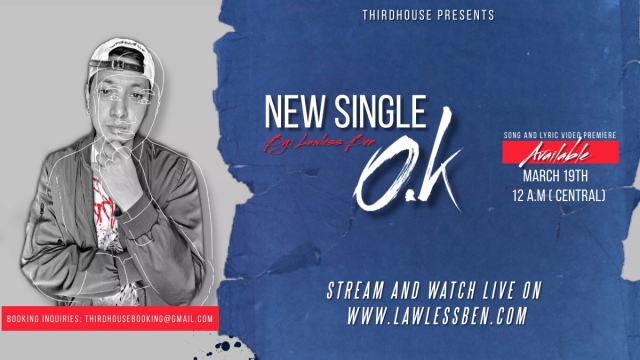