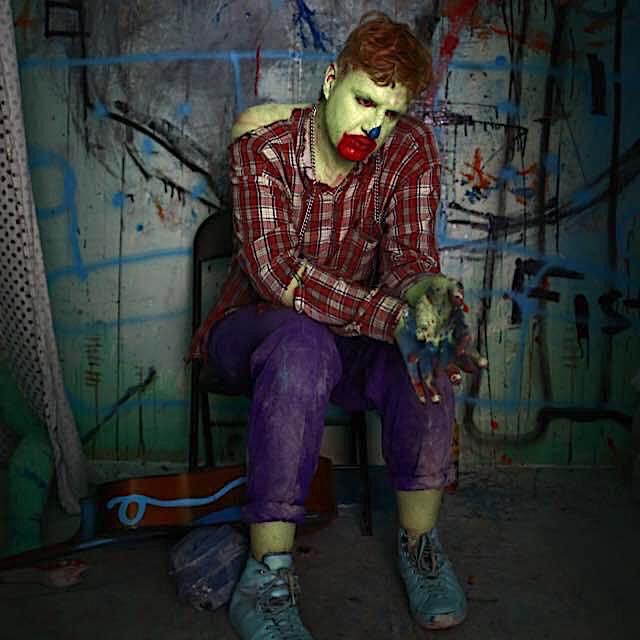 John Debt is a persona who is worn down, out of luck and somewhat rugged. Raised in Cincinnati and lived in NYC’s Brooklyn borough for ten years, John now lives in Berlin and has hit the ground running since his inception into the industry. Signed with Glowrize Entertainment and known for his very distinctive and stylistic signature sound, he is a self-deprecating savant trying to understand the world around him and blabber to anyone who is willing to listen to his problems and inability to improve himself. The entire concept is about feeling indebted, never being able to pay no matter how much he works. John Debt owes people money from bad decisions but his true debt is the weight of the guilt he feels. He attempts to pay this debt with endless confessions and productivity even though this will never relieve what he believes is owed. With that in mind, we got the chance to do a comprehensive interview with John to further get to know the rising artist and find out what the future holds for him.

•You’ve been active for a decade right now. What got you into music in the first place?

When I was four or five my brother brought home the Biz Markie single “Pickin’ Boogers”. The cover was a cartoon of Biz picking his nose while sitting on the toilet and the song was about playing booger pranks as well as the idea that everyone does it in private and it shouldn’t be a shameful thing. I was a booger picking kid and for me this song was a permanent revelation. I all at once understood the power of artistic expression and in the same moment fell in love with my first hero and artist. Hip Hop culture had already completely consumed my neighborhood by this time, and it was normal to be called upon publicly at random to spit a rhyme. So everybody kind of had to have at least a simple rhyme they could throw out to avoid social disaster. This naturally evolved into freestyle cyphers on the playground or bus stop or wherever. A lot of diss battles started to merge into rhyme form at school. Music has always been important to me, and Hip Hop has always been a lot more than that.

•Writers are usually very personal. What topics or views do you center around your songwriting?

I try to use humor and wit to describe the parts of myself and my experience I like the least. During my dark moments I have been saved time and time again by songs about sadness or anger or loneliness and this makes one feel less crazy, less alone. I have found that the more specific one can be about their actual life the more universal it is.

•Tell me about your worst show and best show.

Worst show… well. There was a really early show I did when I first went solo in a little venue in Brooklyn. The mic kept cutting out. I stopped the first song and restarted like three times. The sound guy said he fixed it, so I went on. It kept cutting. And not like little gaps either; it would cut out for like 30 seconds, come back on for half a bar and then turn off again. I did my entire set this way, mostly spitting into a dead mic, while the audience just heard a beat and a silent emcee whose lips moved without making sound. When it was over I was so upset I threw the mic onto the stage and hopped off the stage and just started walking through the crowd to the exit, when one of my only fans at the time, just a guy who showed up at every show I did, approached me and said “you know John if I could just give some notes, it just didn’t seem like you had the energy you normally bring” and this pushed me over the edge. How could the audience not understand what had happened to me? I cussed him out like a young idiot. This poor guy who showed up to support me, and then even tried to give me criticism to attempt to help me. I was in a tank uniform as YAWWN started the first beat. I rapped about doing the dishes, and then we did maybe 30 minutes of classics after that. The crowd grew and by the end I completely had ‘em. Sort of the opposite of the worst show in that this time I wasn’t prepared at all and everything went perfectly right. I felt like a champion that night.

•How is the Berlin scene compared to Brooklyn’s?

I can only speak to my experience regarding comparing Brooklyn to Berlin. I mean comparisons are super hard and kind of problematic. I played a bunch of shows in Brooklyn and Manhattan and Queens. The thing about New York is, there are so many endless bars, small venues, and tucked away stages. So I can’t tell you how many shows I did to mostly empty rooms there. Those were just kind of, you know stripe earning moments. The times I actually played to full crowds could be rough because well, New York is rap’s birthplace. It’s a very important part of the culture. I feel like it’s a hyper critical scene because they know their hip hop well. I’ve never fit into any genre well and sometimes that’s hard for people to accept. If something hasn’t already been established and accepted by the people then you are under a more severe scrutiny I think, a weirdo. I got some boos, I got stuff thrown at me sometimes. On the other hand it felt really great when someone would come up to me after, albeit secretly, and tell me they really felt my lyrics. There’s many options, and New York is huge and takes forever to get around, so it can be hard to fill a room on a Wednesday or whatever, especially when you are just starting out. Berlin is kind of the opposite. If there’s a show at all, no matter what it is, the people come, they stay, and they actually watch or experience whatever work is on display before finalizing an opinion. People walk into concerts off the street and stay, and this never happens in NY (in my experience) because people are super busy and don’t have time to just check random shit out. Berlin is not a rap town at all. However they are really open minded. In fact, most people I ask say they don’t like rap, but also don’t seem to know of any from the past 20 years. So they, like the New Yorkers, have a pre-judgement I have to overcome. But they listen. Every concert I’ve ever done in Berlin has ended with someone coming up to me saying they had no idea they liked hip hop but they love my music, and now they want to investigate to see if there are other artists they like. So in Brooklyn I was breaking expectations by not fitting in and in Berlin I break them by not being Gangster Rap from 1995.

Plans for 2021? Well I’m working on a sequel to me and YAWWN’s 2018 release Nevemrind, although this time it will be two 5 song EP’s instead of a full length. Hooking back up w YAWWN aka Paid Holidays, we decided to start doing live online mini concerts for everybody stuck at home. Since there’s a deadly airborne virus the world still hasn’t overcome, spraying DNA loudly towards a group of people standing close together just isn’t possible. I’m really excited to be working with my new manager Mr. Olu of Glowrize Management. We’ve got some great ideas regarding merchandise and all the other things that come along with a musicians job outside of concerts. We’ll also be releasing several John Debt solo EP’s this year. A lot of writing and a lot of recording. Also, I can’t say who yet, but I have a couple exciting collaborations coming this year as well.